In preparation for DAC 2014

As an EDA company our development cycle seems to revolve around DVCon and DAC. This year DVCon and DAC came fairly close together. I feel, we just finished DVCon and now we are preparing for DAC. Come to think of it, our engineering and marketing team’s schedules are going to get more hectic because of the cloning of DVCon into DVCon Europe in October and DVCon India even before that! We have decided to participate in all these DVCons. Might as well go to China whenever that happens.

Coming back to DAC … If you remember our last DAC show in Austin we had a lot of fun with the caveman and cave woman theme. In fact we had Amanda dressed up as cave woman at our booth. The theme was so successful that apparently some folks who were unhappy with the attention we were getting complained to the DAC organizers. The result was that DAC organizers included a new clause in their exhibitor contract starting this year, and it goes like this … 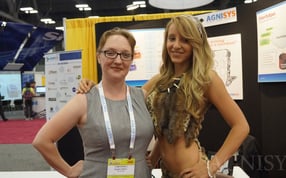 Professional Dress Code: Models, demonstrators, hosts/hostesses and other employees and personnel in the exhibit hall must be attired in a businesslike,
professional, tasteful manner. The use of costumes is limited to theater presentations only.

The show attendees, including some media people dropped by and didn’t think that Amanda’s costume was in a bad taste. I think DAC management has a needlessly rigid attitude. I remember a time several DACs ago that this was fairly common.

In any case, this year we wanted to avoid the controversy all together. So this year we plan to have a new type of attendee engagement. We are launching an annual game called –

We wanted to call it the “Agnisys Hunger Games” but that’s probably TradeMark’ed.

So preparations for DAC are going on in full swing. Our booth is relocated now to a more central location, earlier we were stuck in a corner, but the current location is better. I’m excited about the prizes that we are giving away.

Now coming to our technology that we are showcasing at this DAC.

As promised, we are launching a new product called DVinsight. It is the “Mystic tool” that has now been officially named. We had a contest about the name with participation for the DVCon 2014 attendees. DVinsight (DVi for short) was the clear
winner.

IDesignSpec keeps getting bigger, better, faster. We will have a “turbo mode” to make it super fast, we have also worked on our goal of 100% automatic register verification – which means you create the spec in IDesignSpec (either Word/Excel or SystemRDL, or IP-XACT) run a command or press a button and get 100% code coverage for all your registers. We have also added numerous properties to SystemRDL to ensure that users can use it for UVM generation. Creating “Constraint driven coverage and assertions” has also been enhanced.

IVerifySpec will now feature automatic updates of status in a Web based environment.

I’m looking forward to an exciting DAC, especially exciting this year because of the Agnisys Glory Games.