YAML stands for Yet Another Markup Language – is a data serialization language enhancing human readability at the register level.  It consists of minimal syntax and uses a python style indentation for indicating nesting.

YAML is fast and concise. It contains vertical ruler which can be removed, consists of simple code completion for existing words, replacing always tab keypress by spaces (default may be set but configurable) and source formatter (can restore or drop comments as well). Enter your YAML in the area which can be input and you can immediately start editing it in a neat web-based or application based YAML editor.

IDesignSpec (as illustrated in Fig 1) takes YAML as an input format, read its configurations and functional specification and generates corresponding output from the specs. The register level information is configured and used as specification content and provides the required document headers for debugging outputs. YAML consists of templates and every template configures the attributes as per the required specifications.

SystemRDL descriptions are used as input to software tools to generate circuit logic, test programs, printed documentation, and other register artifacts. It provides support for registers from the specification and uses for model generation and verification purpose in case of maintenance and documentation. Generating all the requirements from a single source ensures their consistency and accuracy.

A description captures the behavior of individual registers, the organization of registers into register files and allocation of addresses to registers. Information about the registers in a circuit design is required throughout its lifetime, from initial architectural specifications to the creation of an HDL description, and post-silicon testing to the deployment of circuits.

The SystemRDL language was specifically designed to describe and implement a wide variety of registers and memories. Using SystemRDL, developers can automatically generate and synchronize the register specification in hardware design, software development, verification, and documentation.

A variety of register behaviors can be described as simple storage elements, storage elements with special read/write behavior (e.g. ‘write 1 to clear’), interrupts, and counters.

The description of registers is necessary to have accuracy and consistency, so the registers specified by the architects and the registers programmed by the users for the final product are the same. SystemRDL is intended for RTL generation, RTL Verification, SystemC generation, documentation, passing through the material for other tools (debuggers), software development. 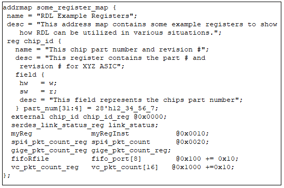 The VMM from Synopsys was released in 2005 and is currently based on the IEEE 1800 SystemVerilog standard. It offers a methodology for the development of powerful transaction-level, constraint-random verification environments and includes a library of classes and applications to provide higher level functions for improved productivity. One such application is Register Abstraction Layer (RAL) which defines blocks, registers, bit fields and addresses in a format called RALF. RALF can be used to create VMM architecture.

RALF is a register abstraction layer format which can be used to represent the RAL model in a text format.

The evolution of this methodology promises to be interesting as the support for other languages such as SystemC or ‘e’ comes on board as well as the maturing of various applications. The focus on the HW/SW interface verification could not have come at a better time.

RAL is used to model the registers and memories present in the design. UVM comes with a register package which is used to model these registers and memories. With its numerous advantages, there are also some disadvantages. The UVM RAL model is good for small testbenches but when one moves to large system level testbench which contains thousands of registers, it impacts the performance and adds significant load to the simulator designs. Download our whitepaper on –  In pursuit of faster register abstract layer.

The example illustrated below is used for formatting of register abstraction layer: 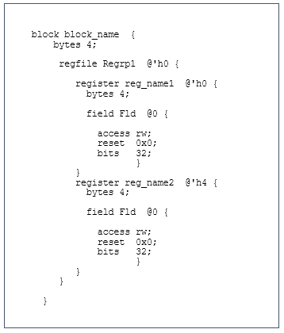 Figure 3: RALF can be used to create a VMM infrastructure

Using these three industry standard methodologies, registers can be described in textual format. Table 1 and 2 illustrate the comparison of basic constructs and external registers available in SystemRDL, YAML and RALF.

With increasing complexity, there is a need to standardize the test intent and behavior of the design. Designers create the hardware design with certain functionality, configuration or sequence in mind. Verification engineers read and decode the spec and write SV/UVM sequences. Firmware engineers repeat the same step but this time in his/her own environment typically in C/C++. In short, the same sequence of functionality is repeated several times by different teams. On the other hand, A PCIe expert writing sequences for simulation may not be familiar in writing the same sequence for emulation or prototyping.

The Portable Test and Stimulus Standard (PSS) defines a specification for creating a single representation of stimulus and test scenarios. This can be used with different configurations across various levels of integration which enable the generation of different implementation scenarios. And these can run on various execution platforms like verification, emulation, firmware, and post-silicon validation. This helps in automating the test process, thereby reducing the time to generate complex use-case scenario development.  It generates tests, 10x faster than hand coding – from IP to sub-system to SoC level, including hardware-aware software.

Sequences generated by ISequenceSpec and the “exec blocks” along with test scenarios are realized in the PSS tools like Perspec which are used to generate the high-level test sequences to get the 100% coverage which is possible 10x times faster.  Figure 2 illustrates the integration of the PSS Tool with ISequenceSpec.

We were invited for a presentation at CDN Live 2019, please check the details here. If you’d like a copy of the presentation, send us an email at marcom@agnisys.com.